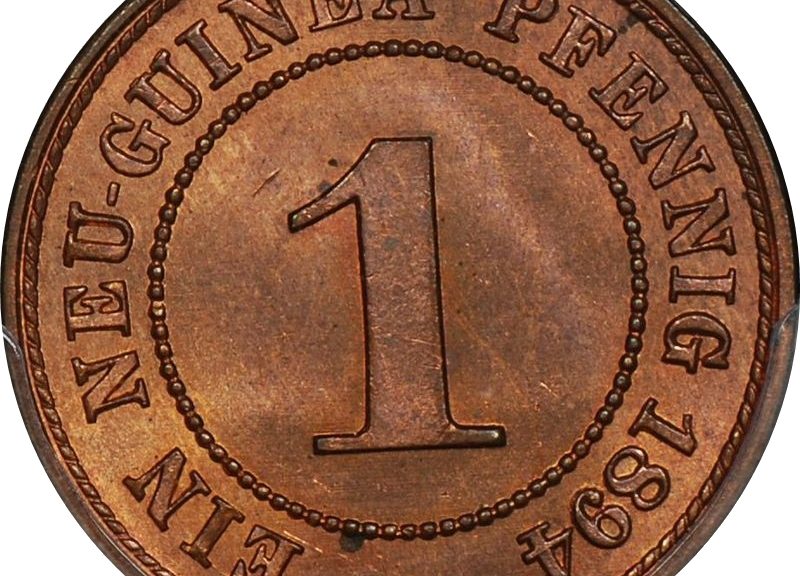 It’s May 4th and the television just indicated that a 7.4 magnitude earthquake occurred in Papua New Guinea.

It is of interest because it is the second quake of that magnitude that has occurred somewhere in the last month.  But where is Papua New Guinea?  What is its history?  What is it’s coinage like?  I’m curious.  Here is what I learned.

In 1527 the Spanish navigator Jorge deHemeses landed on the northwest shore of the island of New Guinea which is located north of Australia.  Exaggerated reports about it interested Spain, Great Britain, Netherlands, and Germany who all laid claims to parts of it.   In 1828 the Netherlands claimed the western half of the island

Skip to 1884 when Germany annexed the northeastern part as German New Guinea.  A year earlier (1883) the Queensland colony in Australia. Annexed the southeastern part.  Britain recognized the claim, and made the area a protectorate in 1884.  This relationship continued until 1906 when it was transferred to the Commonwealth of Australia and renamed Papua.  World War I came along and after Germany’s defeat the League of Nations mandated the northeast part, New Guinea, to Australia for management.

In WWII the Japanese seized the northern part of New Guinea Island in 1942. But by 1944 the Allies had recovered it    After the war, the Netherlands got the west half of New Guinea Island back.  The northeast portion became the United Nations Trust Territory of New Guinea, again under Australian administration.  The governments of the NE and SE were placed into a combined unit in 1949 Known as Papua New Guinea.  It gained self-government on December 1, 1973 and full independence on December 16, 1975.   Of course all of the governments but the Japanese issued coins. An interesting fact that I found out about Papua New Guinea is that it is the second largest island in the world.