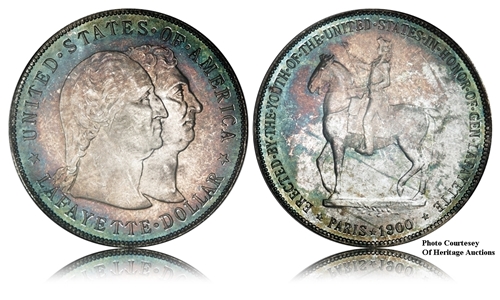 To mark the turn of the century an exhibition/worlds fair was held in Paris in 1900.  In addition to the exposition the city was also hosting the second Olympic games.  Between these two events turnout to the exposition was expected to be very heavy.

One of the events to take place at the Exposition was the unveiling of an equestrian statue of General Lafayette.  Lafayette had been the French General in charge of the French assistance to the American military during the American Revolution.  While not well known by many citizens today, during the Revolution Lafayette was widely beloved and second only to Washington in the hearts of the American public.  He was also a favorite of Washington and after the revolution the two men kept up a lengthy correspondence until Washington’s death in 1799.  So great was the country’s love for the man that when he made a return visit to the United States in 1824/25 he was honored with celebrations and parades all up and down the east coast.  (A somewhat commonly encountered numismatic souvenir of these events are 1824 coins counterstamped with a small portrait of Washington on one side and Lafayette on the other.)

In early 1899 The US government committed our country to participation in the exposition and pledged the contribution of $50,000 to the cost of the Lafayette statue.  Now once the government had pledged their assistance they then turned to the public to make good on their pledge.  A campaign was begun to collect donations of cents from American schoolchildren to raise the money to pay for the statute.  After all it had worked for raising the money for the pedestal of the Statue of Liberty.

Well maybe it didn’t work so well for the Lafayette statue because in March of 1899 the Lafayette Monument Committee approached Congress for the authorization of a commemorative coin, the proceeds of which would go toward paying for the statue.  Originally 100,000 half dollars were requested but this was later changed to 50,000 silver dollars.  The coin legislation proceeded quickly through Congress and was passed on March 3rd, 1899.

The coin was designed by Charles Barber.  On the obverse appear the overlapped busts of General Washington modeled from the Jean Houdon, and a bust of Lafayette from a medal by Peter Krider that showed a much older figure of the General than he was at the time of the Revolution.  Around the busts in the encircling legend UNITED STATES OF AMERICA LAFAYETTE DOLLAR with the denomination being separated from the country name with five pointed stars.

The reverse shows the statue of Lafayette to be erected in Paris as designed by Paul Wayland Bartlett.  Bartlett’s name appears on the base of the statue.  Around the statue in the inscription ERECTED BY THE YOUTH OF THE UNITED STATES IN HONOR OF GEN LAFAYETTE PARIS 1900.

One of the interesting things about this coin is that it is undated.  By law all US coins must bear the date in which they were struck.  The 1900 date on the Lafayette dollar is not the date of the coin, it was the date of the statue unveiling.  The Lafayette dollars went on sale on December 8th 1899 and all of the coins were struck on the centennial of General Washington’s death, December 14th, 1899.  Distribution began on December 20th 1899.

The sale price of $2.00 each was quite high for most people (about two days pay) but by the end of the Exposition some 36,000 coins had been sold with 14,000 being returned to the Mint for melting.  (Instead of being melted immediately those 14,000 coins sat in the Mint vaults until 1945.  Dealer Aubrey Bebee learned of them and approached the Mint about buying them only to find that they had finally been melted a few weeks before.)  A lot of people must have been disappointed with these coins because after paying $2 apiece for them, by 1903 they were down to $1.10 each retail with a wholesale value of face value.  For that reason a great many of the coins were spent making Uncirculated coins rare today.

Numismatically there was another interesting curiosity about these coins.  Ever since 1836 all the dies made for US coins had been produced by hubbing.  A punch or hub that contained the entire design was pressed into a steel die blank to create identical dies.  For the Lafayette dollar Barber went back to the old way of making dies with just the central devices being hubbed in and then all the lettering and small details being punched in by hand.  For this reason all of the dies used to strike these coins are different.  Four obverse dies and five reverse dies were used to create five different die varieties of this coin.  One of these is much more common than the others, and one of them is extremely rare with only two specimens known today.