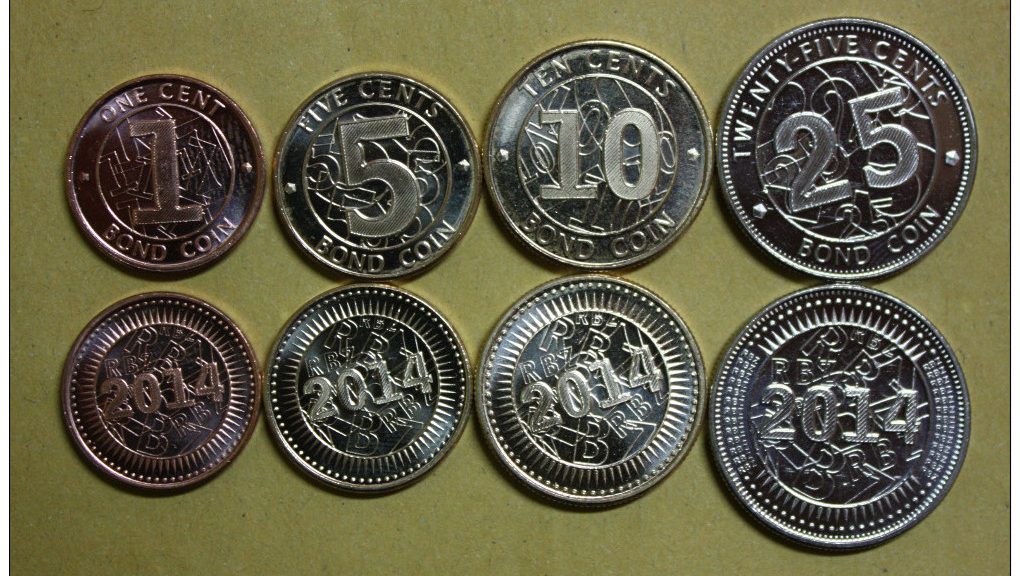 On April 18, 1980 Southern Rhodesia became the independent country of Zimbabwe.

Robert Mugabe was elected president.  In 2000 Mugabe started breaking up the large holdings of land of the white farmers to give it to the black farmers.  In doing so he destroyed the economy of the country and then hyperinflation and unemployment set in.  After three re-denominations and by April 2009, the Zimbabwe dollar was valueless. The economy was in chaos and had 90% unemployment. The government policy changed and permitted the use of foreign currencies.

All during this time small change was needed.  However, it was scarce or not available and really had no value.  Last year, Zimbabwe gave the United States a $50 million dollar US bond for backing for “BOND COINS”.  They are 1, 5, 10, 25, and 50 cent coins worth the same as corresponding US coins. So far they have only issued $10 million dollars worth of the coins.  The coins were struck by the South African Mint in Pretoria.  They replace the irregular value and unstable foreign currencies used as small change.

I brought five coins along tonight.  I’ll pass them around. Here are some of the things to look for:   I consider the following as the reverse:   The denomination is a solid figure with slanting lines on the surface running from upper right to lower left.  It is inside a circle with random outlines of the denomination in the background.  The denomination is in the legend outside the ring at the top and BOND COIN at the bottom At 3 and 9 o’clock is something unusual — a tiny pentagonal five sided pyramid.   (Usually dots or rosettes.)

The obverse has the date, a solid  “2014″ with slanting lines on the surface from upper right to lower left.  It is inside a circle.  Inside the circle in random outlines behind the date are the outline letters “RBZ” for Reserve Bank Zimbabwe.  The 1, 5, and 10 cents have spikes pointing outward from the circle to a beaded border.   The twenty five cent has two segments of spikes pointing out to dots separated by two segments of stacked RBZ’s.   The 50 cent has 4 and 4.  Both have dentils along the edge.  The name of the country is NOT spelled out on any of the coins.